WHY I SWITCHED TO BURGERS AFTER THE GYM

Health and fitness writer, Ben Jhoty, reveals why he decided to overhaul his post-exercise recovery meal.

If you’d told me five years ago that I’d be working from home, wearing a face mask to do groceries and watching politicians talk about ‘unprecedented’ times in daily press conferences due to a global pandemic, I’d have had a hard time believing you, (and an even harder one believing the guy from 'The Apprentice' was the POTUS!). Another thing I didn’t envisage five years ago? Refuelling after a workout with a burger. But you know, you live and learn.

Of course, my life was very different back then. I wasn’t the father of a toddler, hadn’t heard the term ‘dadbod’ and, possibly as a result, didn’t take my nutrition all that seriously. I now fast twice a week on a 16-8 protocol and am far more judicious about what I put in my mouth.

I also work out five or six days a week and regularly play pick-up basketball at lunch times. In five years, that part hasn’t really changed. It’s what I do afterwards that’s undergone radical upheaval.

You see, back then I was a protein shake fiend. After a workout I’d buy a prepackaged carton from my gym, usually strawberry-flavoured. I tried to ignore the chemical taste and the feeling that I was drinking a fluid concocted in a lab. It was, I figured, the price you pay for a decent protein hit. As prodigal ‘chemist’ Jesse Pinkman from 'Breaking Bad' once said, “Yeah science”.

But I remember clearly the day when things changed for me. I’d just completed an upper-body workout (benched 80kg, thanks for asking), and was looking at the ingredient list on the carton. My eyes landed and proceeded to pop open, on the words “traces of crustaceans”. For a moment, I stopped drinking as a mental image of a crab crept across my mind’s eye. I just couldn’t reconcile it with the pink fluid in my straw. It made me shudder. In growing horror, I looked a little more closely at the ingredient list. What struck me first was its length. The next was the number of ingredients I’d never heard of before. What on earth was I drinking?

From that point on I decided to fill up on food after the gym. I started with the bodybuilders’ staple: chicken and broccoli, with a dash of sweet chilli sauce. It was fine, if a little bland. I still eat it from time to time but not every day. The truth is, after a while you begin to dread it. You crave variety. You’d kill for something with a little taste.

It was around two years ago that I first ate at Grill’d. I figured I’d start simple with the Simply Grill’d burger. I remember looking at the nutritional panel (it had become a habit after the crustacean fiasco, plus I’m a health writer). I expected to see the same mix of Latin and algebra I’d encountered on the protein shake. To my surprise the list was short. Even better, it more or less matched up to what I could see on my plate: a bun, meat patty, lettuce, tomato and sauce. I looked at the protein and sugar content, always my first ports of call. At 30g there was as much protein as a shake, while the sugar was under the magical 10g. This, I realised, could work as a post-gym recovery meal.

I’ve since incorporated Grill’d into my recovery routine, dropping in on a roughly fortnightly basis after a run or gym session. I like to roam around the menu, depending on the type of exercise I’ve done. After a run, I generally go for something a little lighter like the Mustard & Pickled! burger, which clocks in at 2130kJ and, served on the Grill’d Low-carb SuperBun, contains a paltry 13.1g of carbs or just 4 per cent of your RDI. After a weights session or post-fast, I prefer to go for something heavier, like the Emperor burger from the new 100% All Natural menu, which delivers 35.5g or 71 per cent of your RDI of protein, on a traditional bun.

I’m also a fan of the restaurant’s options, allowing you to shop the menu according to your food tribe, which include All-in, Dairy-Free, Gluten Friendly, Keto, Paleo, Vegan, Vegetarian, Low FODMAP and Flexitarian. Unfortunately, I can’t claim any real fidelity to any of these tribes as I tend to swing between Keto and All-In and have even gone flexitarian for a meat-free day - something else I wouldn’t have contemplated five years ago. Often the culprit for high sugar, carbs and processed ingredients in many burgers are the buns. The buns that Grill’d uses are all free from refined sugar and 100 per cent natural, whether your pick is a Low-carb SuperBun, Gluten-Free bun, Panini or Traditional.

My fortnightly visits have become a ritual I look forward to. On those days I find I’m more pumped at the gym and my legs carry me that little bit faster on my runs as I anticipate my recovery meal. It feels like a treat that I’ve earned, yet at the same time, because I know what I’m eating is made from natural, whole-food ingredients and contains no artificial colours, flavours or preservatives, there’s no guilt. Like I said, you live and learn.

1. Macro mix.
After exercise, you need a mix of protein and carbs to refuel and replenish glycogen stores. A study published in 'The International Journal of Sport Nutrition and Exercise Metabolism' found that foods such as burgers were as effective as shakes and supplements in promoting muscle recovery after a workout. A Grill’d burger, made from all-natural, whole-food ingredients, is the kind of premium recovery fuel your body needs.

2. No surprises.
I don’t know about you, but I like to know what I’m eating. The transparency offered by nutritional panels and ingredient lists makes Grill’d burgers a better bet, for me, than ‘healthy’ cafe fare like salads or wraps, where you don’t know exactly what a loose-handed chef has added in pursuit of taste. 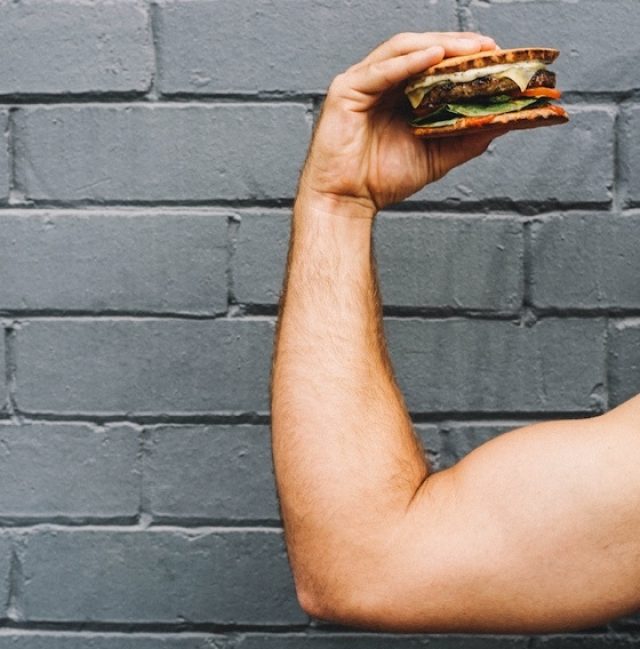 3. Iron Awe.
A beef burger is a great source of iron, an often-overlooked nutrient that carries oxygen to your cells, tissues and organs. Men need eight milligrams of iron each day, women 18 milligrams. You can get around 3 milligrams from 115g of red meat, meaning a burger will go a long way to helping you reach your daily target.

4. Killer combo.
Researchers from McMaster University in Canada found eating a moderate amount of dairy and meat every day can drastically reduce your chances of a premature death. So, make sure you add that Tasty Cheese to your Simply Grill’d burger! 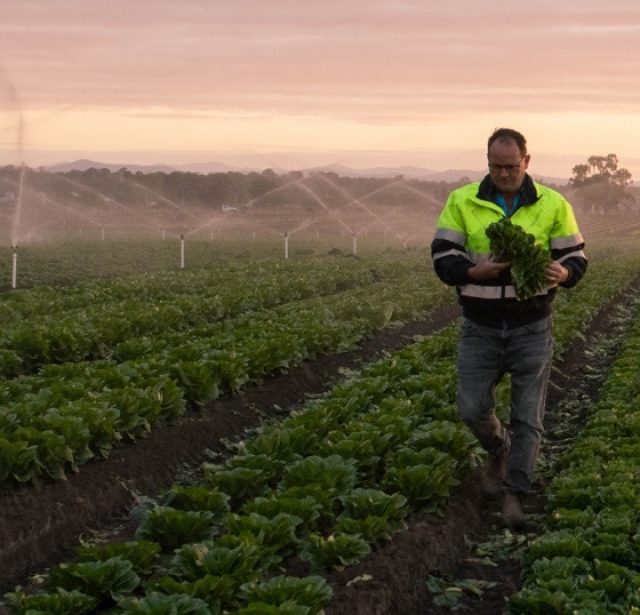 5. Completely natural.
Natural eating is really only half the equation these days. You want to know that what you’re eating is ethically sourced from local producers. A burger from Grill’d is made from locally sourced product, reducing food miles to keep ingredients fresh, while supporting local farmers and Australian growers. Forget guilt, you can actually feel good about eating it. 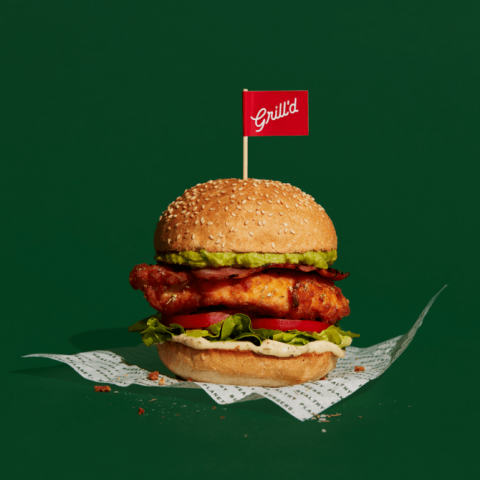 Our chefs have a new recipe for our Healthy Fried Chicken and it's tastier, juicier, and crunchier. 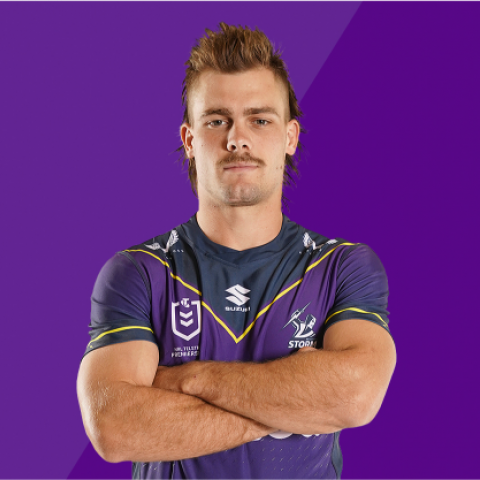 COOKIN' UP A STORM

We’ve teamed with the Melbourne Storm to help players and club members tackle their hunger.